This is a fun pattern to knit! 🧶 It will look gorgeous once it is blocked. Next on the needles: I’m practicing YO (yarn over) with this drop-stitch scarf pattern. 🧶 Criminy and Crivens love it when I wind skeins of yarn into “cakes” with my swift. 😻🧶😻 During my lunch break today, I passed the 75% mark on this triangle garter wrap. 🧶 Each side is now 39” long! Getting back into knitting with a little something for brighter days. 🧶 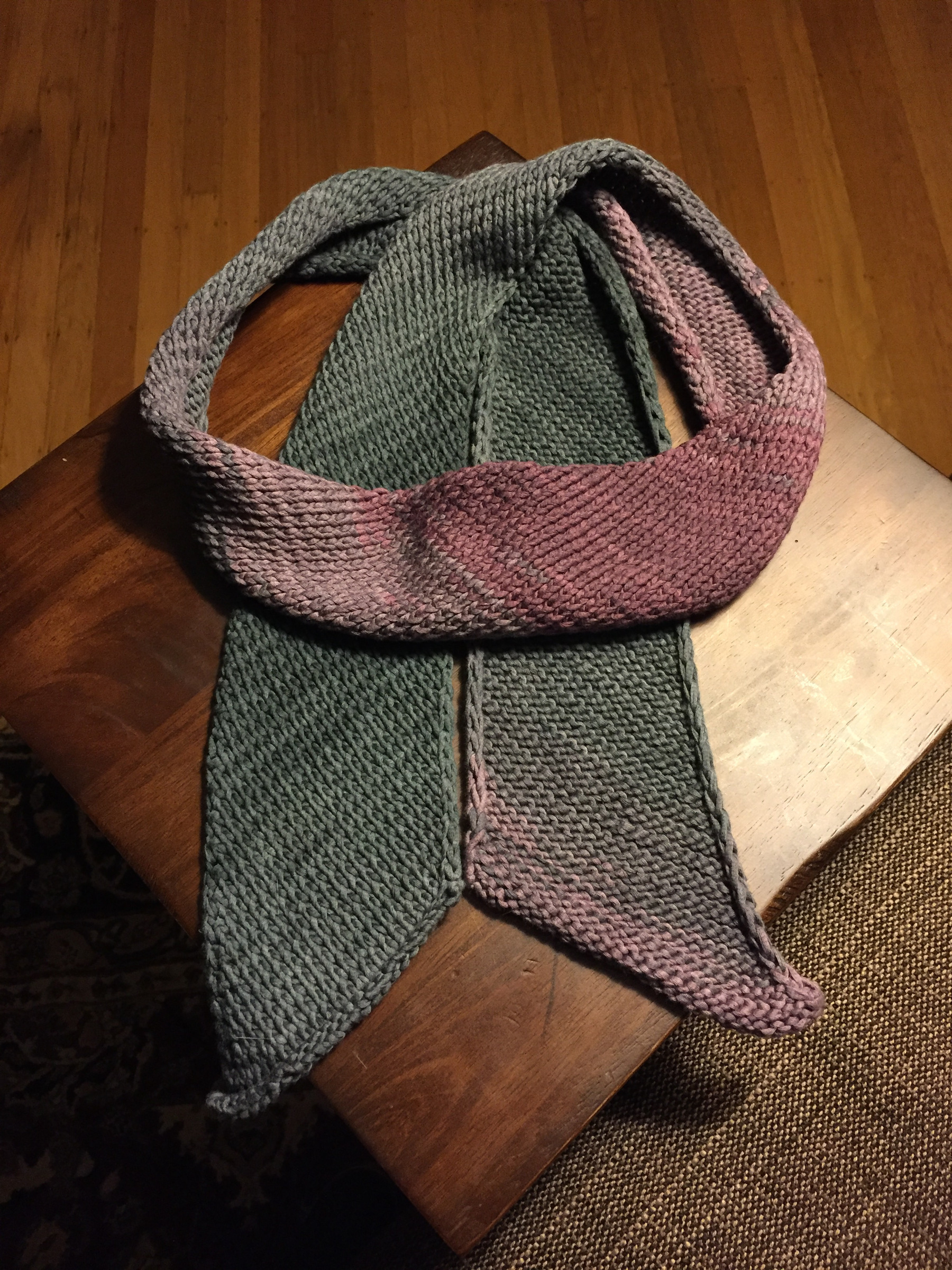 Today I finished blocking my Sol Dégradé Bias scarf. All I see are flaws when I review my knitting projects, but I do think this small project turned out all right. I attempted a few shots with my dSLR but haven’t mastered low-light conditions yet, and the selfie I took earlier was outstandingly unflattering, so this is all I’ve got for now.

My dad and stepmom arrived this evening, and I am looking forward to showing them around our new city. At any rate, the subject matter of these daily photos should improve drastically!

Writing from: my study. Listening to: the soft whir of the laptop fan. 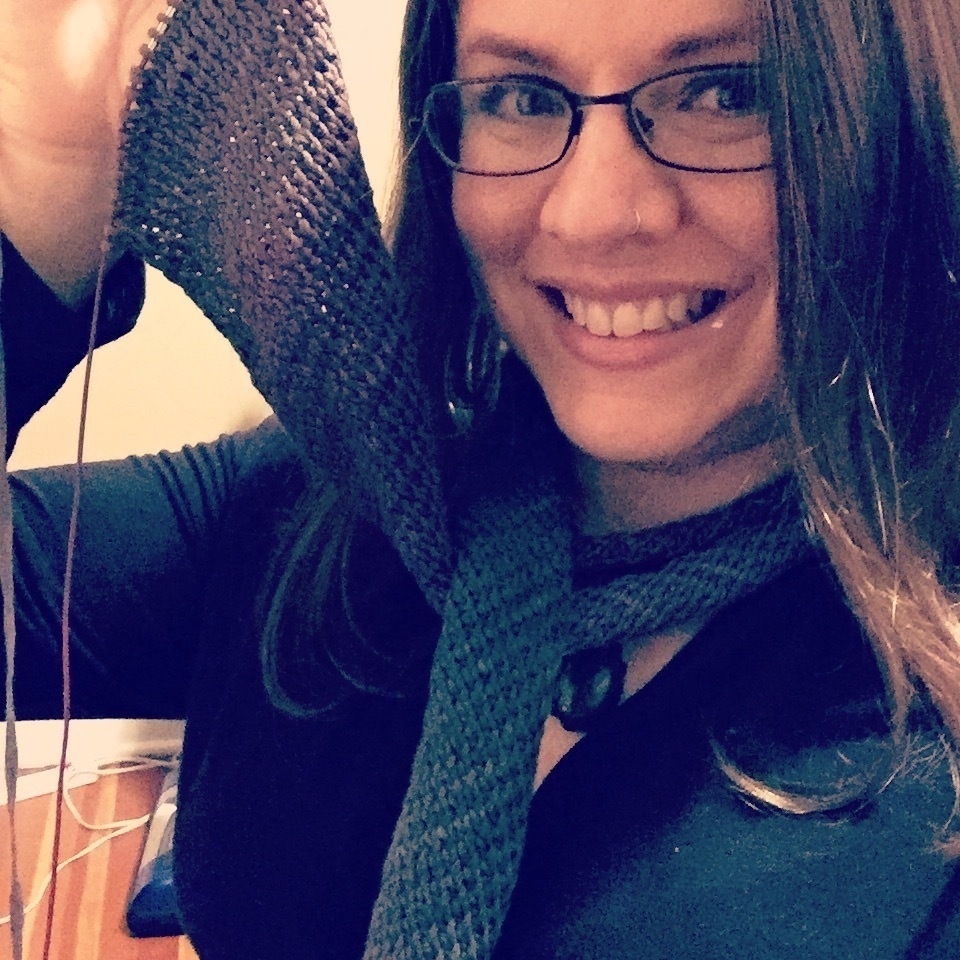 The scarf I am knitting is turning into a scarf! I am always slightly shocked when this happens, like it is a form of alchemy I shouldn’t be able to perform. 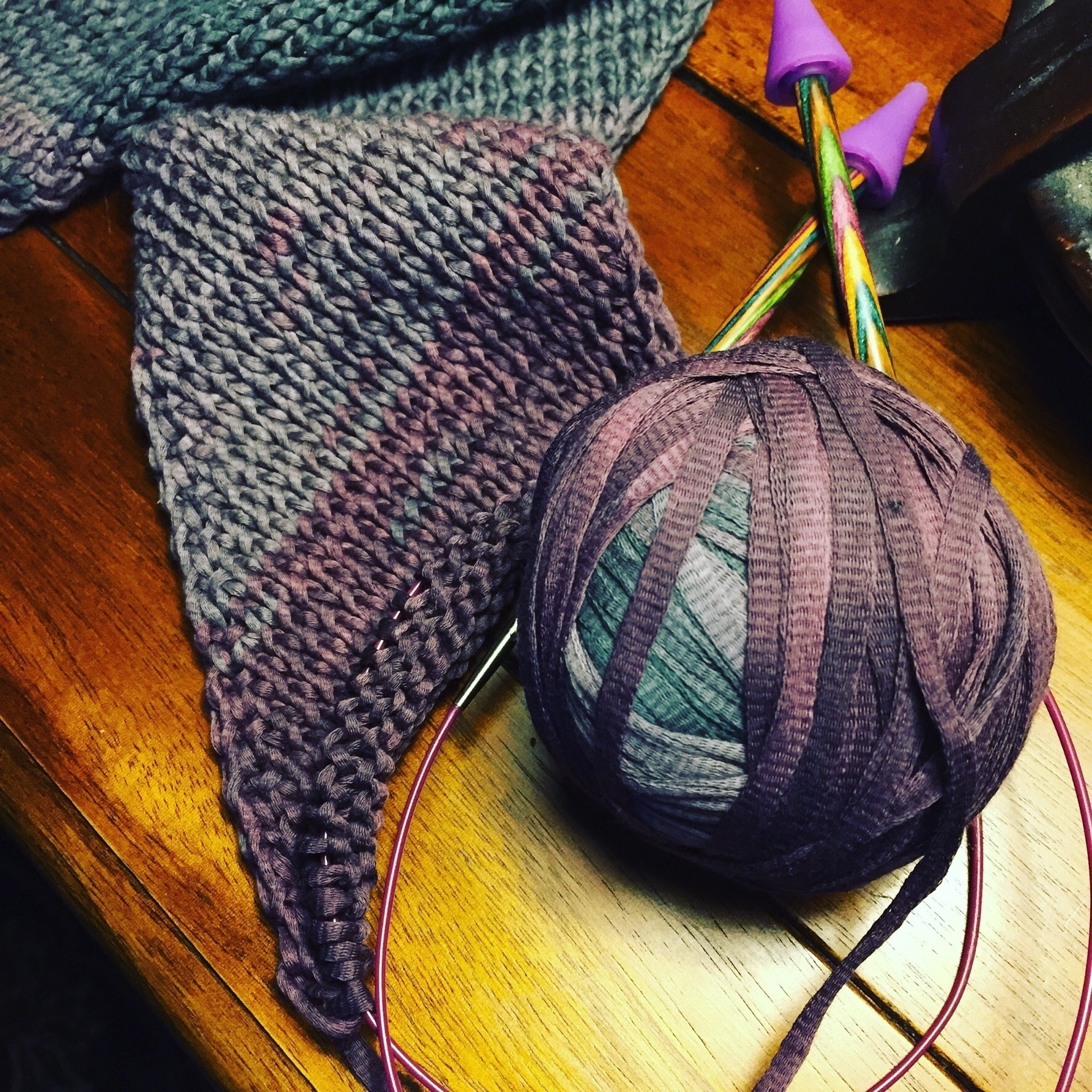 Writing from: my makeshift study in the dining-room. Listening to: Minnesota Public Radio’s 89.3 FM The Current. 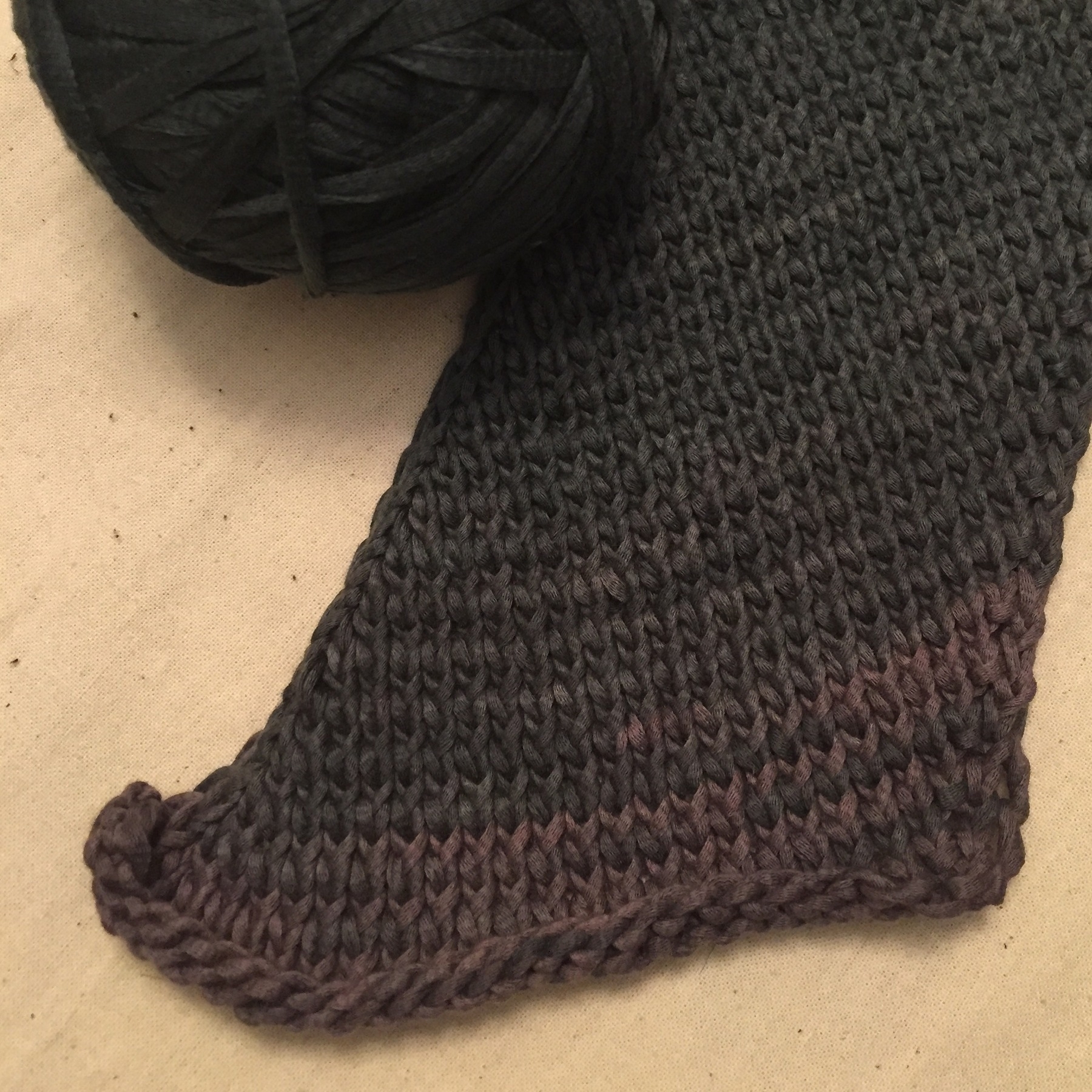 I started knitting a scarf last night. It’s nothing fancy, just a one-skein free pattern from my local yarn shop, but I love the colors of the yarn. This phone snap doesn’t do them justice.

My skills are rusty so it is slow-going, but knitting is one of the most effective ways I have found to lower my stress levels.

I can’t wait until the rest of my knitting supplies arrive from Scotland because I now know how to finish that sweater for FunkyPlaid that I’ve been working on for years.

Writing from: my makeshift study in the dining-room. Listening to: “So I Married an Axe Murderer” on the TV in the living-room.

It’s a sleeve! That someday a person might wear! How did this happen?

Shout-out to my G+ knitting peeps: thanks for answering my panicked bat-signal. I feel confident that I now know how a sleeve works. Sort of. Enough to assemble it in the proper order when it comes time for this pattern to do that, at least.

Now I am trying to get this project finished before my trip to the States, because I’m flying Air France and I hear they hate knitting needles.

gratitude: knitting as stress relief · relaxed deadlines for one of my courses · finding enough gluten-free pasta and sauce in the pantry to save me a trip outside in this rain

Sometimes it is important to do something, anything, to break out of a pointless and negative thought-spiral. I was in one of these today after we took our cats to the vet for a yearly check-up. Zen is built like a furry tank, hale and hearty. And we found out that Torgi is diabetic and also has a sizeable mass in his abdomen. He does not seem to be in any distress, and we will find out how to move forward later on this week, but it still brings up the issue of the mortality of our furkids, which isn't anything I want to face, now or ever.

So I blocked a lace scarf I finished knitting almost two years ago. I was in a state when I did it, so it was not my best effort, but I felt better for finally doing it.