Some friends of mine get together regularly to watch romantic comedies and good-naturedly snark about them. Living thousands of miles apart doesn’t stop them: they meet online and sync up their various media players so everyone is experiencing it in real-time. I joined in the fun today and it was exactly the low-key social distraction I needed. 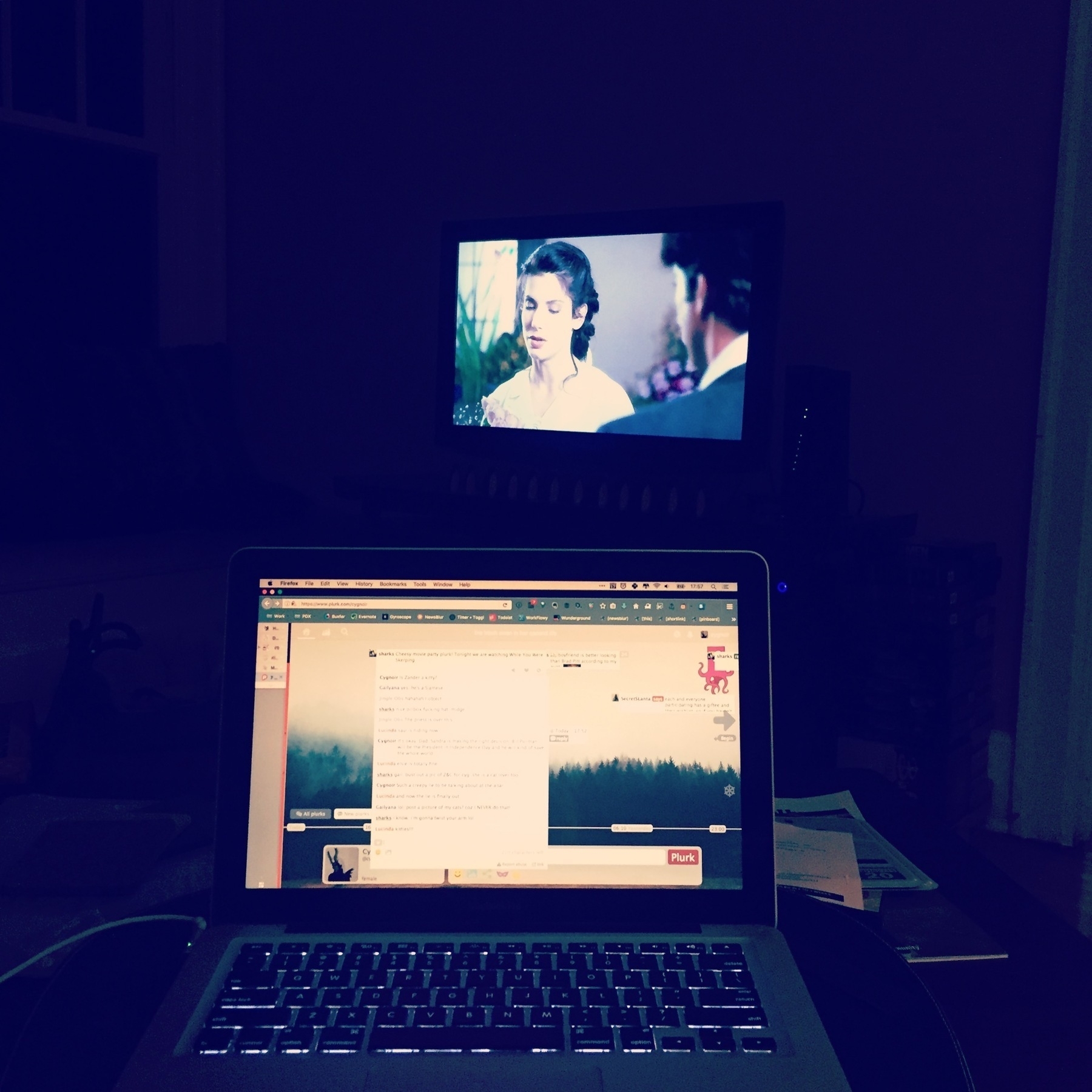 In related news, “While You Were Sleeping” is an incredibly stressful romantic comedy to watch, since it is all based on a ridiculous lie. This is likely true of most romantic comedies, which is why I tend to avoid them.

Writing from: my study in Portland, Oregon. Listening to: only the taps of the keyboard.

This Week and Other Weeks

I have tried to write this several times now. It never goes well. I find unsettling analogies, or take refuge in bluntness, or just pretend the thing that happened didn’t happen at all so I can get through the first paragraph. But it happened. And it derailed the tail-end of my spring completely.

I keep thinking that I will be ready to write about it, and then I will, and then these entries (which were supposed to be weekly status updates, and nothing more) won’t loom in my to-do list like horrible chores.

But I am still not ready to write about it, the thing that happened, and so I’ll just say that at the start of May one of our cats died and he was so much more than “one of our cats” and it was so much worse than I imagined it could be and it continues to hurt every day and I don’t want to write anything more about it so we’ll just move on from here.

Rage, even now, two months past, blindsides me. The smallest things irritate me past rational points. Most social media channels are unbearable not because they have changed but because I have. I don’t know if I will get my old self back.

I don’t know if I want my old self back.

The strangest part of grief is the compulsion to keep pressing myself against the serrated edge of his absence. I am mostly over that phase now but sometimes it comes over me, the need to prod that wound, like I still don’t believe it, so that the pain will make me believe it.

I still don’t believe it.

But I make myself believe it.

Before the thing that happened, I had planned to travel to the States in June to celebrate a milestone in my mother’s life. When the thing happened, the trip carried another weight: I needed to escape, both geographically and mentally.

And then right before I left our other cat had surgery for a fibrosarcoma on her back. She’s doing fine for now.

Grief and worry have a way of clouding memory but here’s some of what I remember of my life from the past few months.

Not much to report on JDB1745, and this will likely continue through the end of the year. There will be small refinements to make but FunkyPlaid must focus on finishing his thesis now so we can’t undertake any major movements. I’m squirrelling away all sorts of ideas for the next phase of our project, and the more I do, the more I look forward to working on it.

The weekend gig is more intense project-wise over the summer, plus many folks are away on leave, so I feel more isolated than usual. I continue to struggle with the balance of wanting to throw myself completely into a job and only being there three days a week.

The guest post I wrote for Cat Rambo’s blog on motivational tools for writers was published. The timing was darkly amusing; my own writerly motivation had ground to a halt.

But now I am recovering, and I am currently working on two projects:

Misfit changed their app and I no longer have a weekly tally of points, so here I’ll start tracking how many days in the last week I hit my fitness goal: 2. Not great.

In April, May, and June I was around the 2-3 days per week mark. One day in May I somehow managed almost twice my goal and my personal best since I started using my Shine by having a normal workday but tacking on a social event in the evening that was 1.5 miles away.

So yeah. I need more exercise.

Since the end of March I’ve read some good books, fiction unless otherwise specified:

And that leaves me at 11 books this year. I will have to seriously hustle to make my goal of 50.

I am giving Apple Music a whirl. So far I love the playlists it suggests for me but it doesn’t have built-in scrobbling capabilities like Rdio or Spotify. For those of us who love tracking what we listen to with Last.fm, that is a disappointment.

My top artists for the past three months:

A friend made a Neo80s mixtape (mixCD?) that I’ve been enjoying too. Lots of M83, White Lies, HAIM, Grimes … really good stuff.

How do I not have a podcast section? I’ll fix that now. My top podcast listens for the past three months (and I am stealing the blurbs from their websites):

FunkyPlaid and I finished “Les Revenants” at the end of April and went on to “Orphan Black”. The first two seasons were so good; the third became unwatchable for me. We stalled out partway through and finished up the season of “Outlander” instead. As of last night we are on the second season of “House of Cards” (US version).

I stopped watching “Game of Thrones” after the infamous episode with Ramsay and Sansa’s wedding night. With that source material and that cast and that budget, there is no excuse for lazy writing. Later I heard that the show has diverged even more from the books, so that’s probably it for me.

I finally saw the film “What We Do in the Shadows” on the plane ride to the States, which was even better than I thought it would be. If you like mockumentaries and Flight of the Conchords, don’t miss this.