I think the bus heard me talking smack about it yesterday. This morning it left me hazelnut non-dairy creamer. 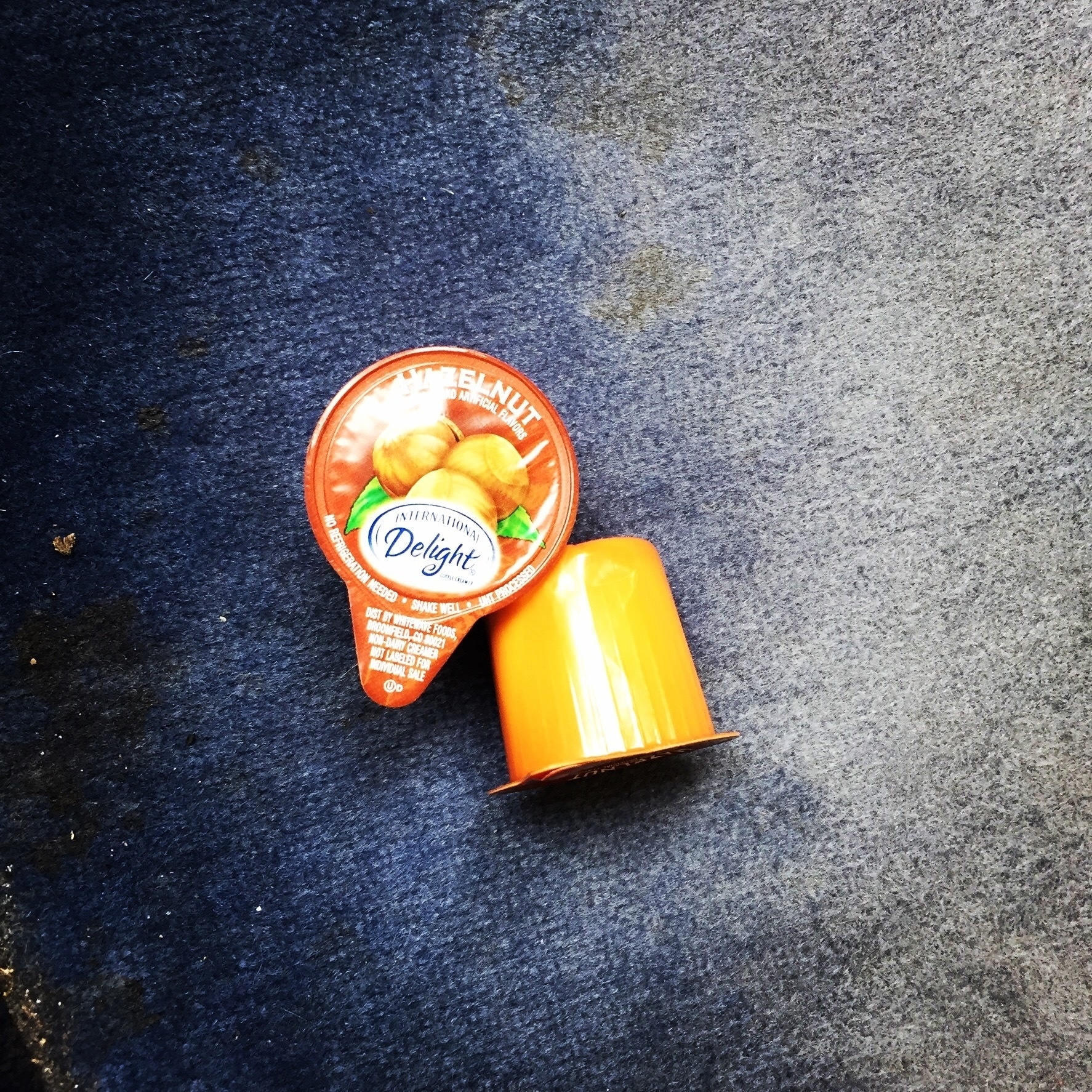 Is this the TriMet equivalent of mints left on a hotel pillow?

(I wasn’t brave enough to take them.)

Writing from: my breezy study. Windows open, trying to get some air in here! Listening to: “Look for the Silver Lining” by Leslie Odom Jr.

I spend a lot of time on the TriMet bus. So much time, in fact, that I’m a little smug about how much reading I get done these days. Books, not internet. At first, I read news on the way to work, but that was just too bleak. (That said, I recently enjoyed reading George Lakoff’s “Understanding Trump” … but not while commuting.)

Today’s photo is of the upholstery on my bus, which reminds me of the beloved PDX carpet, only with 99% more paramecia. Which is fitting, because sometimes I share a bus with humans who behave more like single-celled organisms. On my ride home on Sunday a gent sat next to me and attempted to roll around on me, citing “arm pain”. I refrained from channeling my inner Liam Neeson. My inner Liam Neeson really wanted to tell this guy what kind of pain he was about to experience if he didn’t stop rolling around on me.

Instead I excused myself, stood up, and moved to the back of the bus. Mr. Arm Pain proceeded to grumble at me – all the way across the bus – for moving my seat.

And that’s TriMet life. Most of the time it’s peachy-keen, three hours a day of free reading time. Plus one of my coworkers takes the same bus, and so for half of my commute, I have an awesome seat-mate who doesn’t even mind if I doze off.

Writing from: my stifling study. Sticky temps here. Listening to: the hum of the fan and the faint rush of cars a block away.

The dashboard widget said 8 minutes, so I power-walked. As I slid onto one of the last non-senior seats on the bus, I caught a whiff of rubber cement.

The last time I smelled rubber cement on the bus, I was sitting next to the same person.

The smell was not entirely unpleasant. It reminded me of when I used to decorate my Chandler’s assignment notebook in high school, cutting out strange pictures from magazines and pasting them on the pages.

And so I catalogued one more smell that will not make me give up my seat on the bus.

I stepped off the 19 Polk with a mad grin.  The driver had been brilliant, announcing all the stops and transfer points, and even complimenting riders as they stepped onto the bus. “I love those boots, girl!” “C’mon up, beautiful!” She told me she loved my hat and called me cute as I thanked her and hopped off.

Trader Joe’s was aflutter with pre-dinner preparations. The cashier tried to make small-talk with the women in front of me, but they were dour and busy. He gave me a look and a shrug as if to say, I tried. He, too, complimented my hat, so I thanked him, and we exchanged those small pleasantries that make the line go faster.

As I was waiting for the 27 Bryant in an unfamiliar part of town, a young man, scruffy but cogent, was roaming a nearby parking lot.  He picked up a downed piece of fence and tossed it at the side of the concrete building a few times, seemingly out of boredom. I looked away, gauged my other bus-waiting options, pondered the dangers of walking instead – those things you do when you live in a city.  After a while, he emerged from the parking lot and saw me. Slowly, he approached.

I felt no threat as he walked up, hands at his sides, head slightly lowered.  It wasn’t that I hadn’t thought about what would happen if he attacked; there were plenty of cars passing by, and I had quite a set of lungs and boots.  His demeanor was not that of an attacker.  He looked like a little kid caught doing something.

“Hello. Do you work there?” he turned slightly to the building with a small shuffle of his feet.

“No, I don’t. I am just waiting for the bus.” I made eye contact, smiled politely, then looked away as if to accentuate the fact that I had not noticed him near the building.

“There are cool things by the parking lot. Flowers and sculptures and things.“  I had noticed these, but barely, so I nodded but did not encourage.

He stepped to the side again.  The side of his face I could see was turning red.  “I went to the restroom in the parking lot. Did you see me?” His use of the word restroom instead of bathroom surprised me.

“OK. I went to the restroom there.”

I shrugged, “I don’t think anyone could see.”

“All right.  Thank you.” With a flat gesture of his palm out to me, almost as if he meant to shake my hand, he bowed slightly.

He shoved his hands in his pockets and wandered up the street.