Analog or digital planning for 2019?

In a few weeks, I will need to stop dithering and make a decision: will I use an analog or digital planner for 2019?

When I started my current job at the library, I had a Bullet Journal system in place, which satisfied my two primary drives: recording notes and ideas by hand, because I learn and retain them better that way, and using my fabulous fountain pens and ink, because they’re so much fun.

Within a few weeks, my to-do list inflated at an alarming rate, and to keep up I switched to Todoist to track my tasks, especially relying on reminders to nudge me to do stuff on particular days at particular times. So handy!

While I think Todoist is a great app, I’ve been yearning to go back to simpler methods for months now, even as I assume more responsibilities at work. When Ryder Carroll’s book “The Bullet Journal Method” came out, I convinced myself I could do this again. Back to basics! Get rid of the bells and whistles of an app and hand-write my way to happiness.

Then one night I woke up in a cold sweat from a nightmare in which I have forgotten some important due-date because my phone didn’t yell at me anymore.

How are you planning your next year, with notebooks and pens or with apps? Help me decide in the comments.

I’ve introduced FunkyPlaid to “Detectorists” and I’m enjoying it even more the second time around. 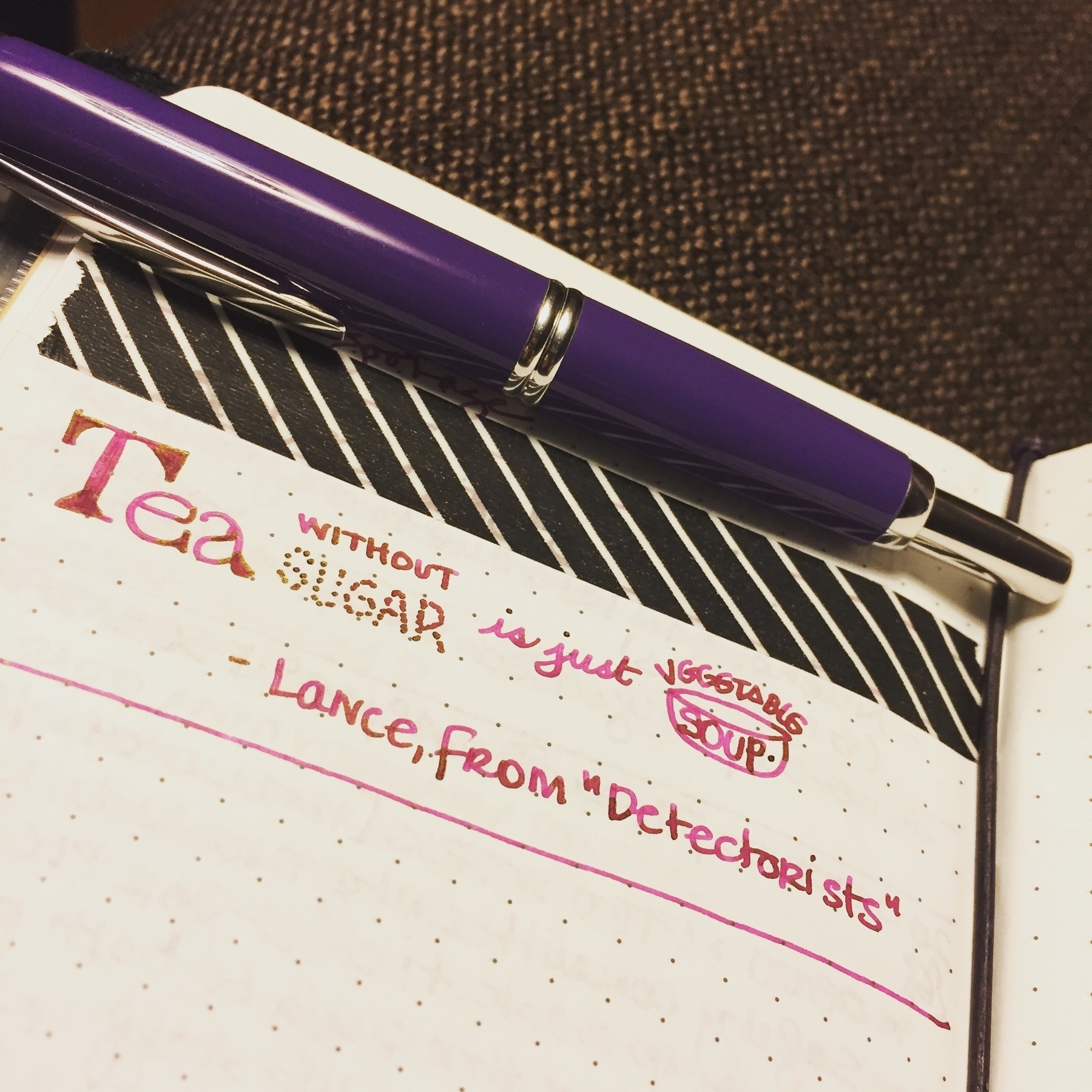 Writing from: my study in Portland, Oregon. Listening to: that great theme song again.

I’m experimenting with some additions to my Bullet Journal, some functional and some just for fun. Clockwise from the upper left: a rubber stamp to add some flair in a boring corner; a weekly list that I tipped in with washi tape; and a sticker from an ephemera set I found at Flax Art & Design many years ago. 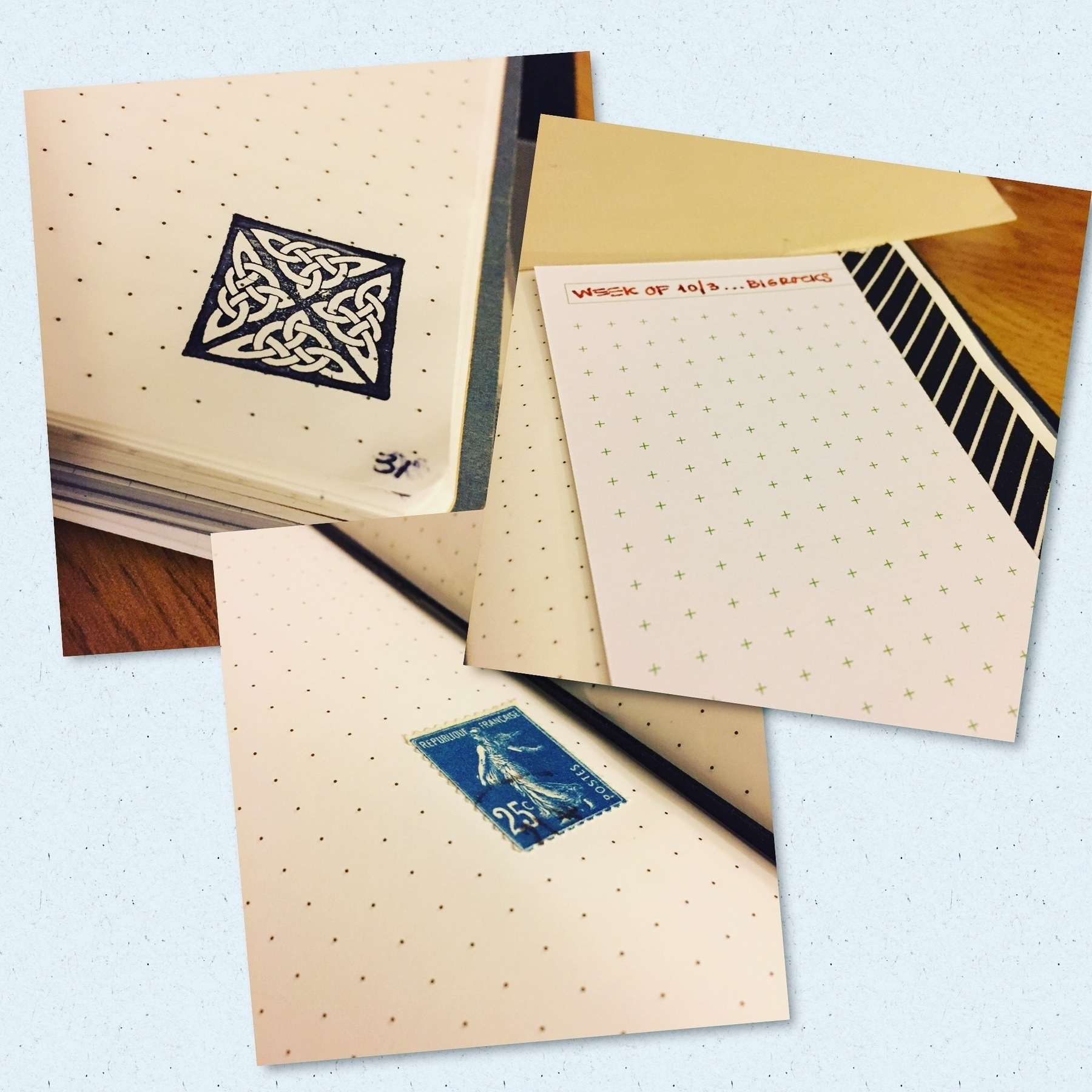 Writing from: my study in Portland, Oregon. Listening to: the whir of the laptop fan.

As part of an ongoing attempt to wrangle my ever-growing task list, I have been searching for a simple way to earmark important tasks that may get buried in the Bullet Journal format. Then I remembered Book Darts, little pieces of paper-thin metal that slide onto the edge of a page. 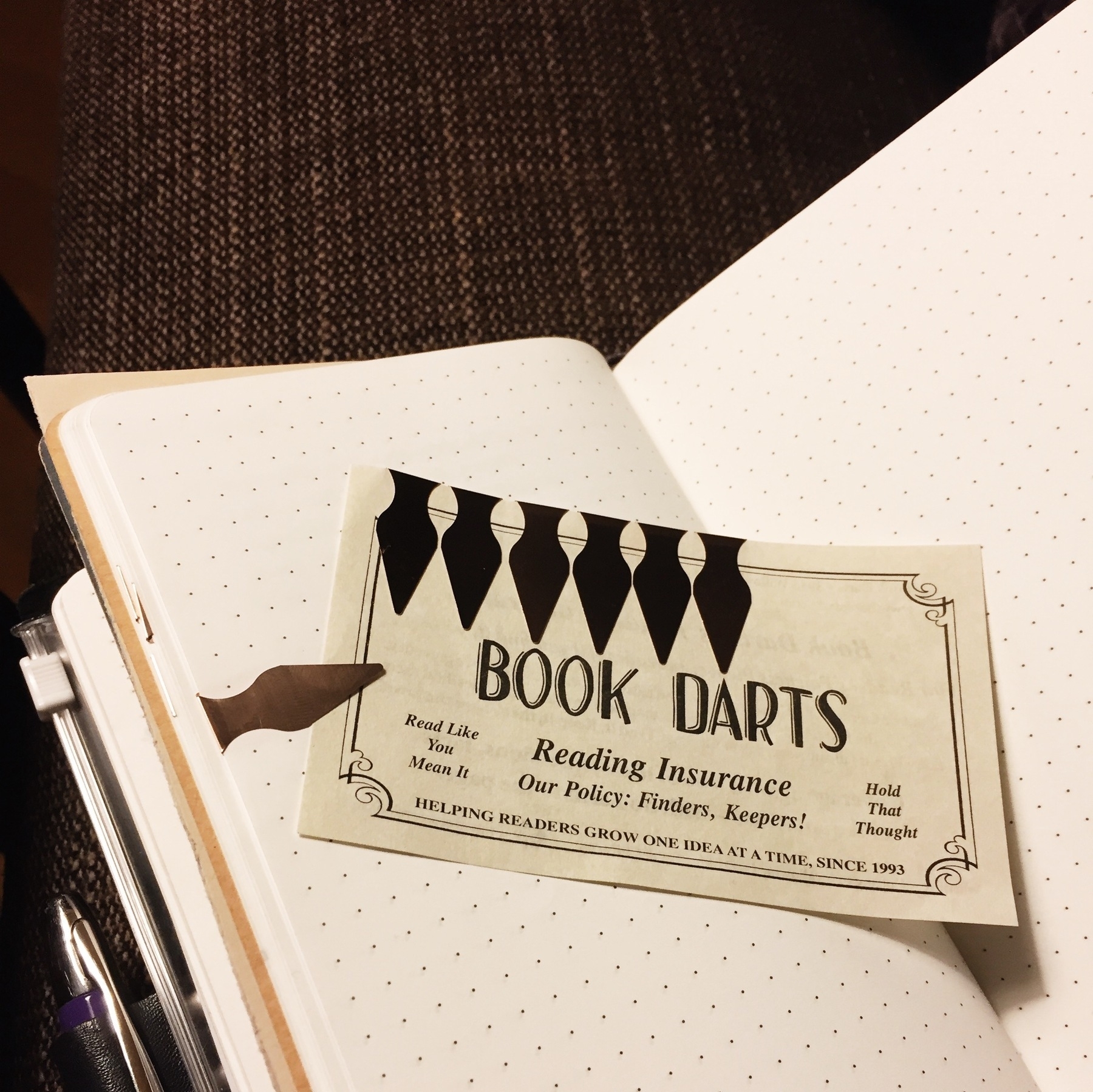 Every morning, I slip a Book Dart next to each of the day’s three Most Important Tasks. Book Darts slide on easily and don’t budge, even on thin Tomoe River paper, until I slide them off again. Simple, reusable, and elegant.

Writing from: my study in Portland, Oregon. Listening to: “Reunite” by Isbells.

Every Thursday, I share a productivity tip with my work team. Today I shared the Bullet Journal system in honor of its third birthday. And I had Goulet Pens’ refills for my own Bullet Journal waiting for me when I got home tonight. Time to play with my notebook! 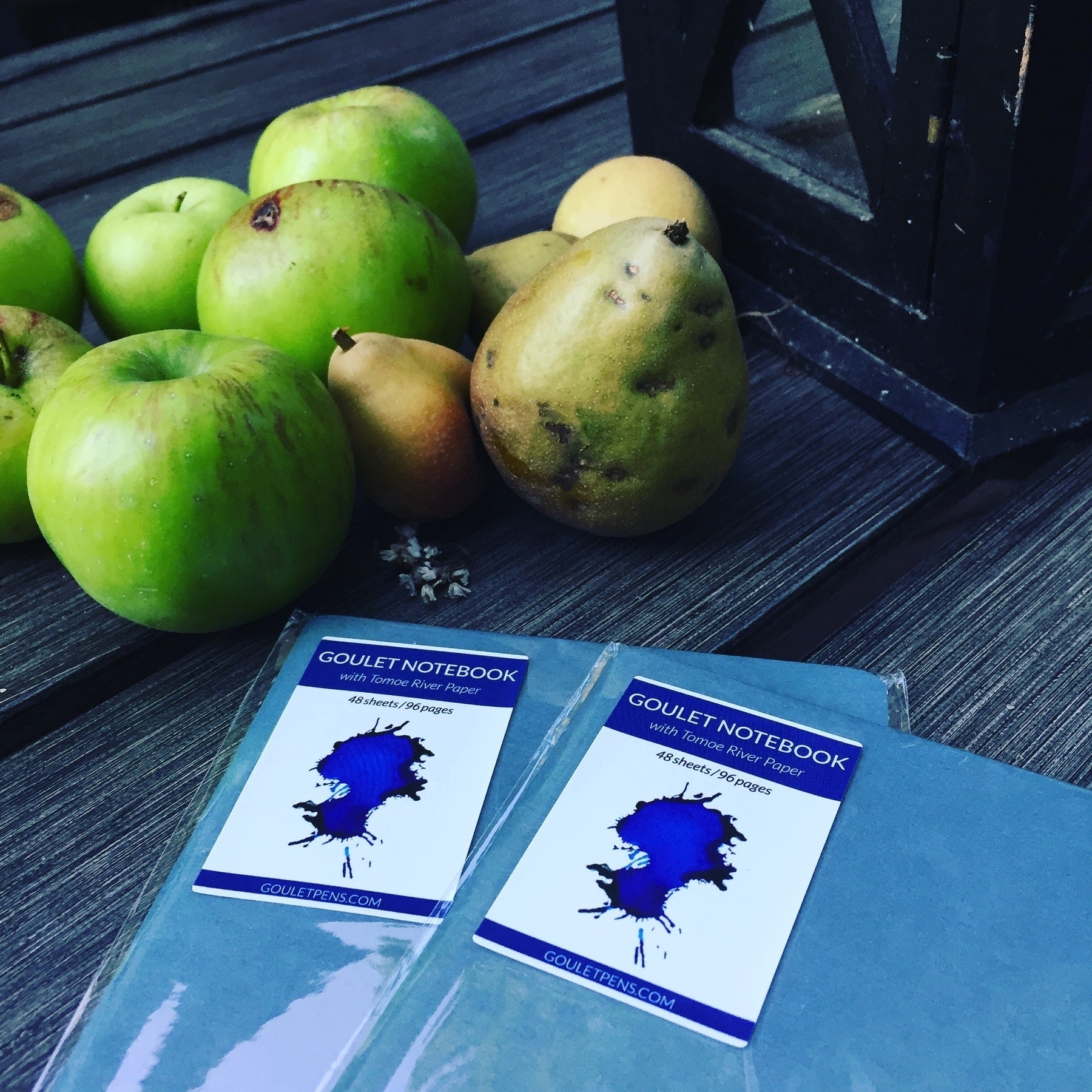 Writing from: my sticky study. Listening to: the crickets just outside.

It’s funny, the halfway brain that sprouts from sleep deprivation. I wake up at 05:30 but really I wake up on the bus in downtown Portland, trying to remember if I did basic things like dress myself and feed myself and not leave the front door wide open.

Many photos to catch up on! Nineteen, in fact. I may have a little bit of a preoccupation with flowers. To be fair, this city blooms gratuitously. And now ripe apples and plums are falling off the trees, sometimes knocking me in the head like a physics lesson.

I’m still in love with my new job, but it is mentally and socially intense. Most evenings I come home and barely have enough energy to eat dinner. While my in-laws were in town, we managed a little weekend escape to Forest Grove, which I needed desperately.

Zen now reliably wakes me up with mournful howling before my alarm goes off. While FunkyPlaid is out of town I have taken to sleeping in my study downstairs so I can soothe her faster.

Other snippets from the past few weeks:

Time for bed. Tonight I will rest well, being all caught up with my project. Well, for a few hours. Then Zen will start to sing …

Writing from: my study. Listening to: some episode of “Prison Break” I’m not really watching. 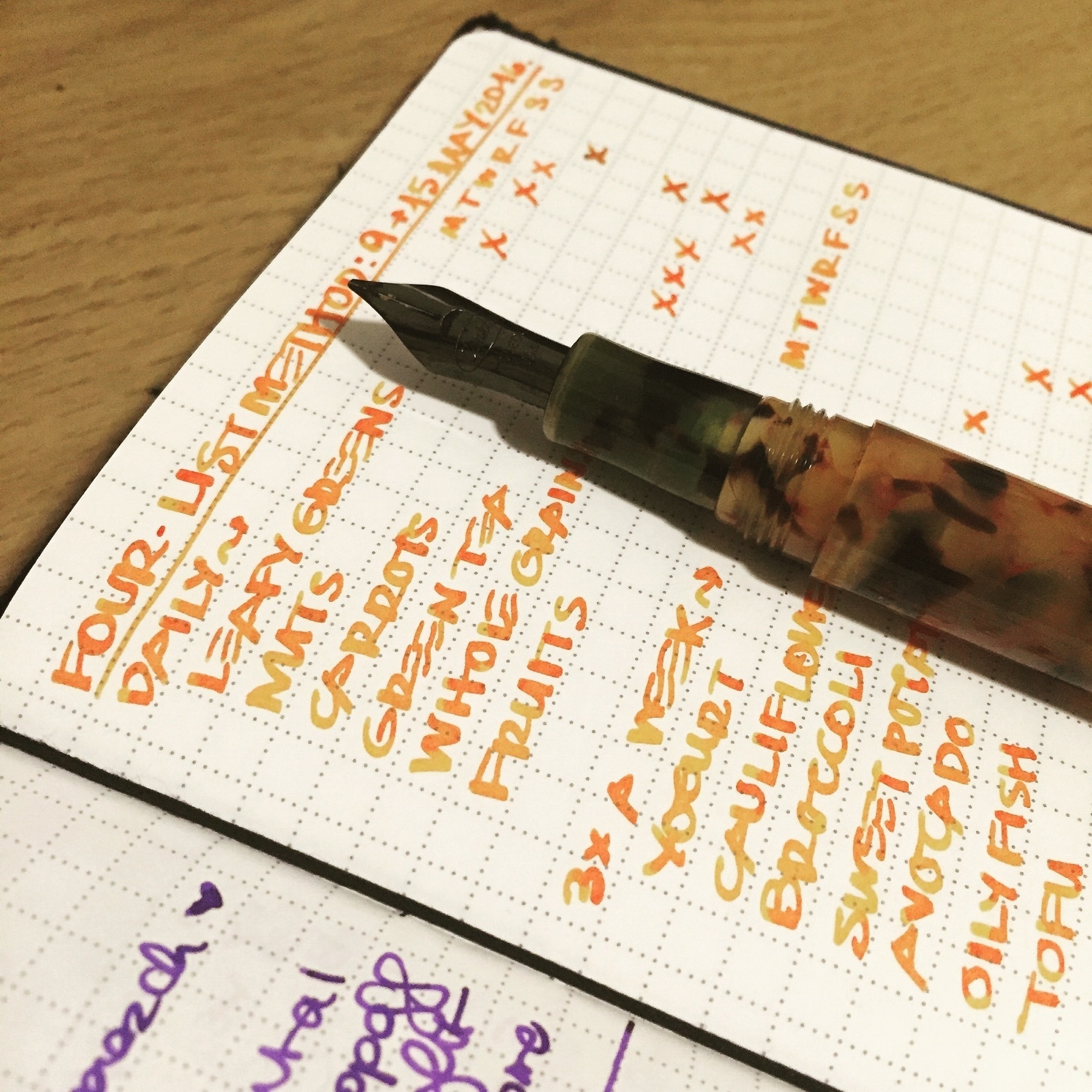 Time to refocus on my health, now that the parental visit is over and I managed to catch a cold.

I don’t do diets. Not being able to eat gluten is enough of a restriction for me, and I think that non-medically-mandated diets can encourage problematic relationships with food. I do, however, fully support reasonable guidelines for healthy eating. I first discovered Alton Brown’s four-list method about a year ago, and since then I have used Evernote to track my own progress with it. Today I decided to switch to a page in my Bullet Journal. I’m still fiddling with the layout but nothing beats pretty ink on nice paper.

Maybe the orange ink will encourage me to eat more carrots. I can’t believe I haven’t eaten a single carrot all week!

Writing from: my study. Listening to: snippets of recorded voices in FunkyPlaid’s study. I heard the word “libraries” …